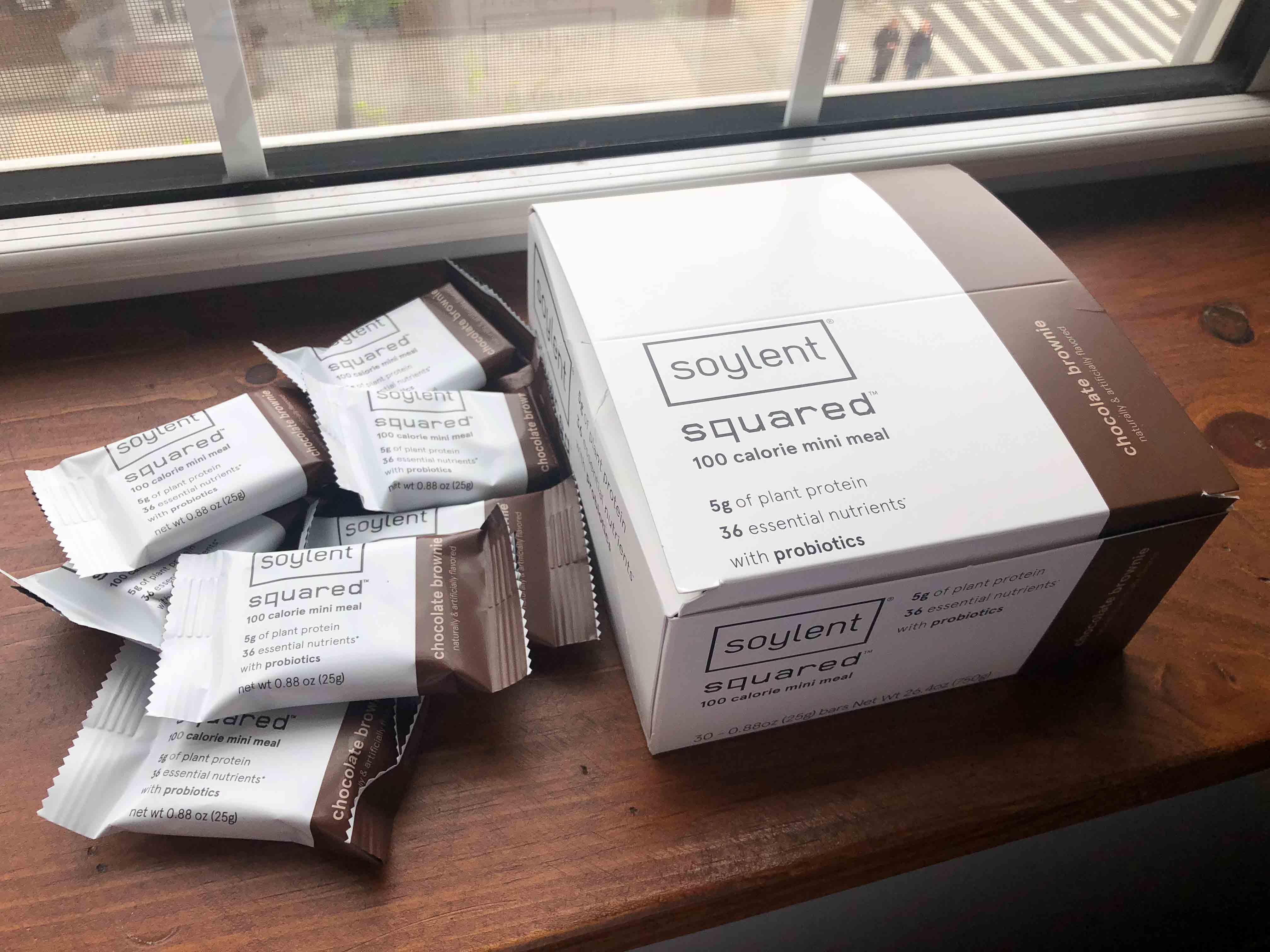 Disclaimer: In Spring of 2018 I worked as a student brand ambassador for Soylent. I no longer work for Soylent and have no relationship with the company outside of being a customer.

It has been over two years since Soylent released (and recalled), “Soylent Food Bar”, their last solid food product. It makes sense for them to have waited this long; I’m sure they were waiting for people to forget about before giving it a second shot. But the internet never forgets! Even though people reported falling violently ill after eating the first iteration of the bar, I wasn’t at all discouraged from buying these Soylent Squared bars. In fact, I knew they were coming back and have been eagerly waiting for their return.

What is Soylent Squared?

From their website: Soylent Squared is the first complete 100 calorie mini-meal bar. Each bar is perfectly engineered to provide 5g of plant protein, 36 essential nutrients and probiotics for digestive health.

Small in size, big on nutrition, Soylent Squared allows you to design the meal you need when you need it; at 100 calories each, you can have 1-2 for a healthy snack or 3-4 for a complete meal.

And you don’t have to sacrifice taste for nutrition because Soylent Squared comes in three delicious varieties: Chocolate Brownie, Salted Caramel, and Citrus Berry.

Why would you eat Soylent Squared bars?

I never had the chance to try the original bars, but I’ve been a big fan of the drinks for the last couple of years and always thought it would be cool to have a nutritionally complete meal in bar form. I’m really glad they decided to break these down into 100 calorie bars because it makes them much more versatile!
I figured these would come in handy for hikes, mid-day snacks, and just to keep in my backpack for those times when I’m hungry but know I won’t have a meal for a few more hours. Yes, most other snacks serve the same purpose, but Soylent Squared is nutritionally complete, so you get more balance out of it.

I started by ordering the Chocolate Brownie to be safe, and am reviewing the product based on this flavor. I’ve already put in an order for the other two flavors and will update this post as soon as they get here!

At first glance, they don’t look super appetizing. They look like they have the same overly chewy and sticky texture of an RX bar. But upon the first bite, I was pleasantly surprised at how good these things really are. There’s a pleasant crisp as you bite into the bar, almost like they mixed in Rice Krispies or something of that sort. The bar is chewy, but not tootsie-bar chewy. You can see from the picture below that it actually breaks apart when you fold it and has a crumb to it. Overall, I think the texture is great and I like it more than some of the other bars we have in my office (RX, Thinkthin, Lara, etc).

To be honest, I wasn’t expecting these to taste all that great either. The Soylent drinks don’t taste bad, but they don’t really taste good either. If you’ve had Soylent before, you know the underlying Soylent taste that you can taste across all the drink flavors. There’s none of that in these bars. If you gave me one of these without the wrapper on, I’d never guess it was a Soylent product. The Chocolate Brownie flavor was pretty good! I like it because it’s not overly sweet but is still somewhat indulgent. I was also expecting it to taste sickeningly artificial, which it did not. I wouldn’t go as far as to say these are delicious, but they are pretty tasty for what they are. I had three of them right after I opened the box!

How much does Soylent Squared cost? Is it worth it?

Some people on Reddit are complaining about how expensive these are, but I really don’t think it’s that bad. When looking at price to calorie, it’s only $0.75 more than the RTD drink. Compared to other bars, I think Soylent Squared is reasonably priced. RX bars are about the same price, at $1.66 per bar (when you buy the 12 pack on Amazon), or $0.83/100 calories.

Where can I buy Soylent Squared? Is there a promo code?

At the moment, you can only buy Soylent Squared on the Soylent website. The FAQ on their site mentions that SS will be on Amazon at the end of the summer. I did some digging for a promo code, but there aren’t any Soylent Squared specific ones that I could find. If you find one, drop me a line and I’ll include it here! Otherwise, if it’s your first purchase from Soylent.com, you can get $10 off through this link.

I really like Soylent Squared. It’s a functional food that I plan on keeping handy. Generally, something described as a “functional food” isn’t something I’d expect to taste very good, but I actually think they taste better than a lot of other protein/health bars. That being said, don’t expect it to taste like a real chocolate brownie, because it’s still a “nutrition bar”. Compared to real brownies, these suck. But compared to most other bars, I think these are pretty good. If you like the Soylent drinks, or you’re just curious about these bars, I would definitely recommend them.

If you found this review helpful and are planning on buying some Soylent Squared, please consider using my referral link . I'll get $10 and you'll get $10 off your first order too!