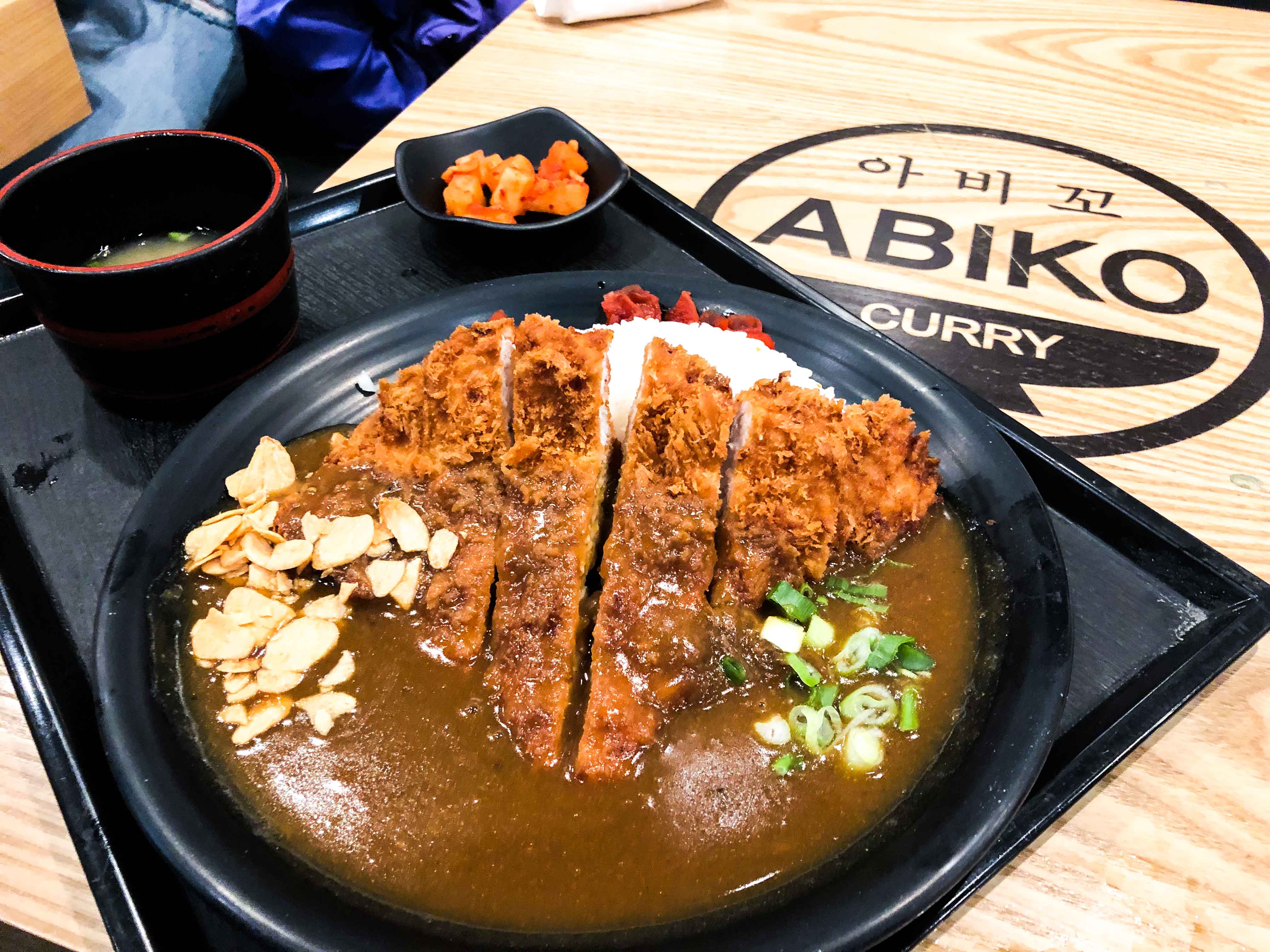 The first time I visited Abiko, my mouth was sent to the fiery pits of hell, and my eyes were trying to extinguish the fire by dropping tears from above. I’d muster up some courage to take a bite, and then immediately brace myself for impact. It hurt so bad but tasted so good, I kept going back for more. I was drunk, hungry, and determined not to bitch out. Deep breaths. Ice water. Carefully wiping the tears from my face, I finished the fucking curry.

Abiko is a Japanese curry joint located at the tail end of K-town, and is home to some fantastic curry that really packs some heat. It completely lacks the usual “this is fucking spicy” signals that you’ll find at other restaurants who boast their spice. There are no skull and crossbones, warning signs, or waivers for you to sign. The menu is non-threatening, and covers a lot of ground with it’s rice, udon, and pasta dishes; all of which can be covered in curry and accompanied by beef, herb chicken, or fried cutlets of sorts. The spice levels range from 0-4, or from “baby” to “spice guru”. There are also options for spice free hashed rice and donburi for those with little to no spice tolerance.

When I mentioned that I was spiced to tears earlier, it wasn’t from the level three or four spicy, it was from a level one. Either I’m a huge wimp, or everyone else in the shop was eating mild, because that shit was MAD spicy and my friends and I were the only ones dying. We legitimately thought we were getting pranked at one point, because we could not believe a level one was that spicy. But it was spicy in a good way. Often times, things are made spicy just for the sake of being spicy, and the rest of the dish can get lost behind the spice. Abiko’s curry however, was verbally abusing me, but I couldn’t stop eating it because it was so delicious. The beef was thinly sliced, gyudon style, and gently tucked under the hellfire “medium” spicy curry. It came with some miso soup, which I thankfully drank before I was spiced out, and also some fukujinzuke (pickled veggies) that helped me along my way.

Strangely enough, the second time I went to Abiko, I was actually craving the spice that did me in the week before. I walked in fully prepared to take on the challenge but wimped out at the last second. Shamefully, I ordered a “baby level” curry with pork katsu cutlet. Fuck, it was heavenly. The medium brown curry was so smooth and complex. If the hardworking Japanese spirit had a flavor, it would be this curry. The pork cutlet was beautifully crisp, and only half of it was tucked under the curry so every other bite was flip flopping between crunchy and soft.

Although I enjoyed a pain-free meal the second time around, I am 100% planning on going back to take on the “medium” spicy again. Is it weird that I want to experience that again? Anyways, if you’re planning on going, consider this review a warning. The level one is more like what you would expect a level four to be anywhere else, so plan accordingly. My thoughts and prayers go out to the poor souls who accidentally order the level three or four. Until next time, Abiko!